Once Goddess Parvati got the divine fruit desired by her two sons Ganesha and Kartikeya. Lord Shiva decided that whoever circled the world three times and came back first would get it as a reward. Kartikeya quickly climbed on his peacock and began his journey. Ganesh was well aware that his formidable form and his vehicle rat were wasting his chances of winning the race. After thinking for a while, Ganesha started walking around his parents, Lord Shiva and Parvati.

When they asked him why he was not circling the world, he answered - My world is at my parent’s feet. He not only won the fruit but also earned the admiration of other gods.

- Think out of the box

- You should be aware of your limitations

- Solutions to every problem are hidden around you

- Don't panic if someone has started their journey earlier than you- Every time it is not necessary that an early start will end up with the win.

- Thoughts and intentions should be clear and positive

- Do more with less investment

Life is an Art

Popular posts from this blog

Why don't pain and problems leave me alone in my life? I'm stuck in it. I can't get out of it. 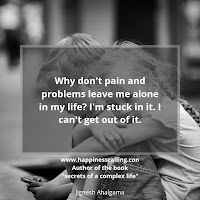 Answer: My dear friend, first I want to ask you that, what are you doing to come out from this situation? You need to understand and accept that everyone has problems and pains in their lives. The severity of the problem may vary from person to person. But everyone should take appropriate steps to deal with them. What if you sit there wondering why this happened to me and you don't take any action, you will never get out of it. I would like to mention a short story here; it will help you understand the importance of taking action towards the problem. You are enjoy boating and suddenly you fall into the sea. So what will you do then? At first you don't understand what happened, nothing comes to your mind. But after a while you will start swimming towards the boat. Here you have a chance to save your life when you reach the boat. If you are just wondering why this happened to me and you do not take any action, the chances of saving your life will be very less. Your question i
Read more

What happens when we trust someone, but when we realize we have been cheated? How can we strengthen ourselves to get out of this situation? 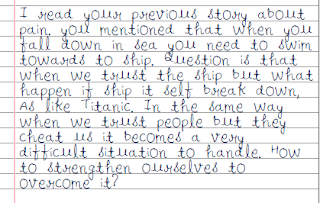 I got these questions from one of my readers.  It is an extension of my previous story "Why don't pain and problems leave me alone in my life? I'm stuck in it. I can't get out of it." She mentioned in her question that when we trust the ship but what if it breaks down on its own. She gave the example of the Titanic. In the same way when we trust people but they cheat us it becomes a very difficult situation to handle. How to strengthen ourselves to overcome it? She is not the only one facing such a situation. We all face such a situation at least once in our lives. Titanic is a very interesting and relevant example. It is said that the manufacturer claimed the Titanic is the safest ship ever. They had took all the safety measures to make it. But tragedy is inevitable. People believed and unfortunately the Titanic was sunk in the middle of the sea. Now think what would you do if you were on a sunken Titanic? You are not responsible for that tragedy or you do not
Read more

Yesterday I was changing channels in my TV. The serial was telecast on Starplus. I paused for a moment and noticed that almost all the characters and locations had changed compared to the serial I had seen about a year ago. What i understood that, the director recruits the character based on the story line and need. They play their roles and they leave the serial after their roles are completed. In most cases the main character stays the same throughout the serial. The director also selects the venue and set based on need. Each character has a special role. Some characters are meant to give pain. Some come to support and give happiness, but those characters leave early so the main character suffers from losing them. The main character has the ability to manage all situations. My life is no different from the serial. It is written and directed by God. God brings different characters into my story. Some come to hurt me. Some are there to make me happy and to support me. According to t
Read more 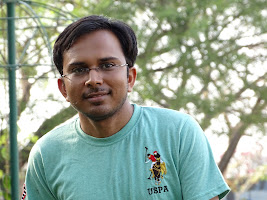